A week ago I tried setting up an ad on Reddit to promote our free training.

As you know by now, I love hearing what people think about SocialSelf. Maybe that’s why SocialSelf is so successful today. Naturally, I wanted to allow comments on my ad to hear people’s thoughts.

Checking in after a few hours, I was quite surprised to see the comments. 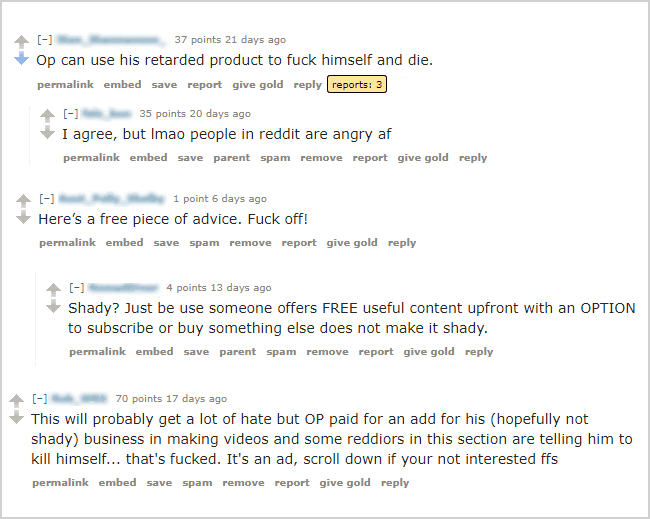 You can see all comments here: https://www.reddit.com/comments/7vqyks/heres_a_free_video_training_called_conversation/

It’s fascinating with hate comments like these. Because even if they are from people who don’t know me and clearly hate ads, they still make me sad and uncomfortable.

Others soon started defending me and the comment field turned into a battlefield. Interestingly enough – the more heated the comments became, the more people signed up with us. So ironically, these hateful people helped us spread our message.

Sometimes when we continue doing something we think is right even when people mock us or hate on us, we get rewarded for it. Why? Because, generally, people avoid criticism. No normal person wants to be in a position where they get negative remarks. But if we can fight through those negative feelings, we can reap the rewards when we come out the other end.

Sometimes criticism is legitimate. This kind of criticism is the most painful one because we know that there’s truth to it. But it’s also a gift because being open to constructive criticism is one of the most powerful ways to improve.

Then there’s unfounded criticism. That’s the kind of criticism we know isn’t true. Like people telling you that you should kill yourself… If we can continue doing what we know is right despite that criticism, we can stand out from most others.

When was the last time you got criticized? How did you react and what did you learn from it? I’m interested to hear about your experiences with criticism and hate in the comments!

Sorry, no posts were found.